The current induced in bulk pieces of conductors (metallic plate), when the magnetic flux linked with the conductor, changes are known as eddy currents.

Eddy Currents are always produced in a plane perpendicular to the direction of magnetic field. Eddy current shows both heating and magnetic effect.

The direction of Eddy Currents can be given by Lenz’s Law. Their flow pattern resemble swirling eddies in water, that is why they are called eddy current. These were discovered by Faucault in 1895. 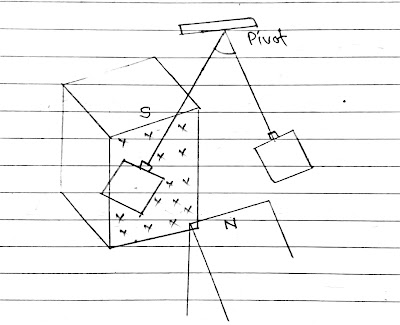 When we move a metal plate out of a magnetic field, the relative motion of the field and the conductor again induces a current in the conductor. The conduction electrons build up the induced current whirl around within the plate as, if they were caught in an eddy of water. This is called Eddy current.
Applications of Eddy Current:
(I) Magnetic breaking in train.
(II) Electromagnetic damping.
(III) Induction furnace.
(IV) Electric power metes.
20.59368478.96288

Chapter-6|Electromagnetic Induction (EMI)| NCERT 12th Physics: Mutual Inductance: The phenomenon according to which an opposing EMF is produced in a ...

Chapter-6|Electromagnetic Induction (EMI)| NCERT 12th Physics: Self Inductance: When a current flows through a coil, it produces magnetic field around ...