The positive charge and entire mass of atom is concentrated at its centre called nucleus.

The nucleus was first discovered in 1911 by Lord Rutherford and his Associates by experiments on scattering of α-particle by atoms.

Nucleus is made up of photons and neutrons these are called nucleons and electron are revolving around the nucleus. 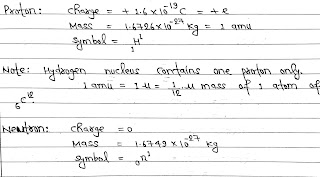 The strong forces of attraction which hold together the nucleus in small nuclei of an atom inspite of electrostatic forces ...