It is a plot of the binding energy per nucleon Ebn versus the mass number A for a large number of nuclei. 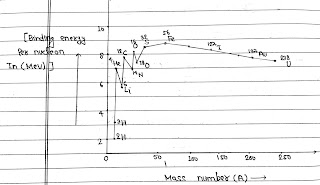 2. For mass numbers ranging from 2 to 20, there are sharply defined peaks corresponding to ₂He⁴, ₆C¹², ₈O¹⁶, etc. The peaks indicates that these nuclei are relatively more stable than the other nuclei in their neighbourhood.

4. As the mass number increases, the binding energy per nucleon decreases gradually falling to about 7.6 MeV per nucleon for U. The decrease may be due to coulomb repulsion between the protons. The heavy nuclei are therefore, relatively less stable.

From the binding energy per nucleon curve, We able to know that which element will under go for fission and fussion.

₁H² +₁H² will combine to give ₂H⁴ and release energy this process is called fussion.

# Uranium will split into Borium and krypton with the release of large amount of energy is called fission.

Shape and Size of Nucleus: Nuclei are regarded as spherical. The size of the nucleus has been measured with the ...