The process of charging a neutral body by bringing a charged body nearby it without making contact between the two bodies is known as charging by induction. 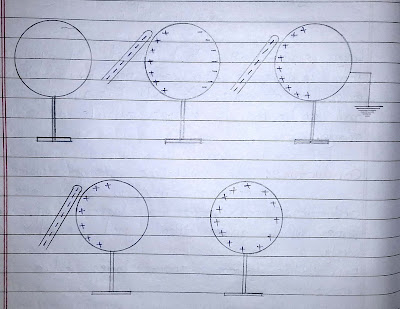 Using the process of charging by induction, conductor may be charged permanently.

1. For charging an uncharged conducting sphere positively by induction, A negatively charged rod is brought close to it.

3. Now, the sphere is connected to the earth, keeping the negatively charged rod in its position.

4. The electrons will flow to the ground, while positive charges will remain held at near end because of attractive force of the negative charges on road.

5. Now if we disconnect the sphere from the ground, the positive charges still continuous to be held at near end.

6.When the negatively charged rod is removed, the positive charge will spread uniformly over the sphere.

So, Now sphere is positively charged.

1 thought on “Charging by Induction”

The Field of an Electric Diopole

Chapter-1|Electric Charges and Fields | NCERT 12th Physics: The Field of an Electric Diopole: The electric field produced by an ...

Chapter-1|Electric Charges and Fields | NCERT 12th Physics: Area Vector: The vector associated with every area element of a closed ...

Chapter-1|Electric Charges and Fields | NCERT 12th Physics: Dipole in a Uniform External Field: Torque on an Electric Dipole in ...