(II) Inversely proportional to the square of the distances between them.

This force acts along the line joining the two charges

If two charges q₁ and q₂ are separated by a distance r, then the force F of attraction or repulsion between them is such that

Where K is called electrostatic constant. The value of K depends on the nature of the medium between the two charges and the System of units chosen to measure F, q₁, q₂ and r. 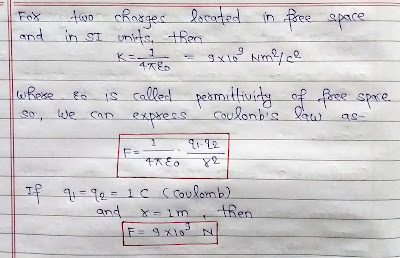 So, one coulomb is that amount of charge that repels an equal and similar charge with a force of 9×10⁹ N when placed in vacuum at a distance one metre from it.

Chapter-1|Electric Charges and Fields | NCERT 12th Physics: Applications of Gauss’ Theorem: (I) Field Due to an Infinitely long Charged ...

Work Done in a Dipole in a Uniform Electric Field

Chapter-1|Electric Charges and Fields | NCERT 12th Physics: Work Done in a Dipole in a Uniform Electric Field: When an ...