Dipole in a Uniform External Field:

Torque on an Electric Dipole in a Uniform Electric Field:- Let an electric dipole consisting of two charges -q and +q are placed in a uniform external electric field of intensity E. The length of dipole is 2l. The dipole moment p makes angle θ with the direction of electric field.

Two forces F and -F which are equal in magnitude and opposite in direction acts on the dipole. 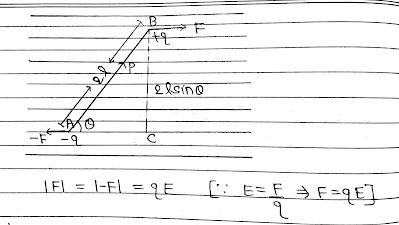 The net force is zero. Since, the two forces are equal in magnitude and opposite in direction and acts at different points, therefore they constitute a couple. A net torque τ acts on the dipole about an axis passing through the midpoint of the dipole.

SI unit is N-m and dimensional formula is [ML²T⁻²].

Electric Field Due to System of Charges

Chapter-1|Electric Charges and Fields | NCERT 12th Physics: Electric Dipole: A pair of equal and opposite charges separated by a ...