It is defined as the average velocity with which the free electrons in a conductor get drifted towards positive end of the conductor under the influence of an electric field applied across the conductor.

It is denoted by Vd. The Drift Velocity of electron is of the order of 10⁻⁴m/s.

Metals have a large number of free electrons, nearly 10²⁸/m³. In the absence of any electric field, these electrons are in a state of continuous random motion due to thermal energy. At room temperature, they move with the velocities of the order of 10⁵ m/s. Since these velocities are distributed randomly in all directions, so there is no preferred direction of motion.

If U₁,U₂,U₃,………Uₙ are the random velocities of N free electrons, then average velocity of electrons will be 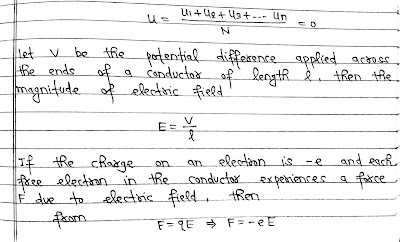 Here negative sign indicate that the direction of force is opposite to that of electric field applied. 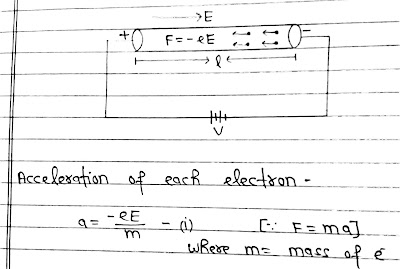 At any instant of time, the velocity acquired by electron having thermal velocity U₁ is 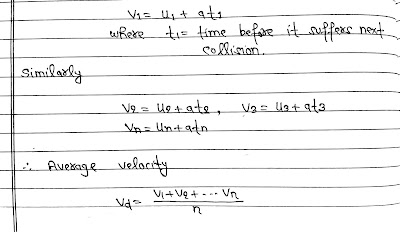 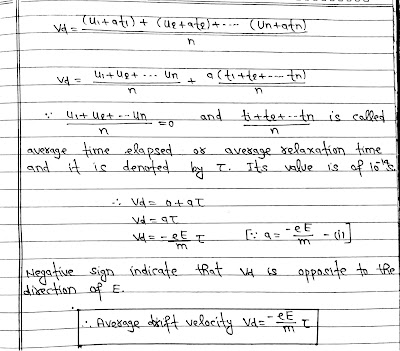 Chapter-3|Current Electricity| NCERT 12th Physics: Combination of Resistors: Resistors in Series: Resistors are said to be connected in series, If ...

Chapter-3|Current Electricity| NCERT 12th Physics: Electrical Energy: It is defined as the total work done W by the source of ...

Chapter-3|Current Electricity| NCERT 12th Physics: Electrical Power: It is defined as the rate of electrical energy supplied per unit time ...