One quantity of light radiation is called a photon which travels with the speed of light.

The energy of a Photon is  E= hv

Where h is Planck’s Constant and v is frequency of light radiation.

When a photon of energy fall on a metal surface, the energy of photon is absorbed by the electron and is used in following two ways.

(II) The remaining part of the energy is used in giving a velocity to the photoelectron. This is equal to the maximum kinetic energy of photoelectron. 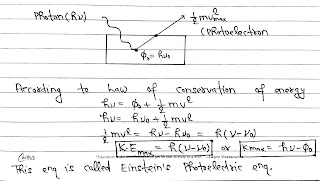 * If v<v₀, no emission will take place.

* If v= v₀, emission will take place but photo electron have no any kinetic energy.

* If v>v₀, emission will take place.

Photoelectric effect gave evidence that light consists of packets of energy. These packet of energy is called light Quantum that ...