The two laws of electromagnetic induction given by Faraday are as under.

1. Faraday’s First Law: Whenever there is a relative motion between a magnet and a coil, then magnetic flux linked with coil changes and an EMF is induced in the coil. If conductor is a closed coil and induced current flows in it.

2. Faraday’s Second Law: The magnitude of induced EMF in a circuit is equal to the rate of change of magnetic flux through the circuit. 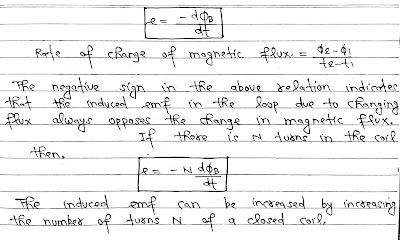 Lenz’s Law and Conservation of Energy

Chapter-6|Electromagnetic Induction (EMI)| NCERT 12th Physics: Lenz’s Law: According to Lenz’s law, the polarity of induced EMF is such that, ...

Chapter-6|Electromagnetic Induction (EMI)| NCERT 12th Physics: Mutual Inductance: The phenomenon according to which an opposing EMF is produced in a ...