Materials can be classified as diamagnetic, paramagnetic and ferromagnetic on the basis of susceptibility.

Diamagnetic substances are those substances which have a tendency to move from stronger to the weaker part of the external magnetic field.

When a bar of diamagnetic material is placed in an external magnetic field, the field lines are repelled or expelled and the field inside the material is reduced.

Explanation: In atom of some materials like Bi, Cu, Pb the magnetic moments due to different electrons cancel out. In such atoms, electrons occur in pair with one of them revolving clockwise and other anti clockwise around the nucleus. So net magnetic moment of a atom is zero. 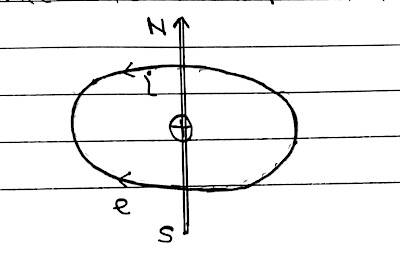 When magnetic field is applied, those electrons having orbital magnetic moment is the same direction slow down. This happens due to induced current in accordance with Lorentz law. Thus the substance developed a net magnetic moment in the direction opposite to that of the applied field and hence repels.
Paramagnetism:
The substances which get weekly magnetised in the direction of external field, when placed in an external magnetic field are called paramagnetic substances. These substances have the tendency to move from a region of weak magnetic field to strong magnetic field. i.e they get weakly attracted to a magnet.
Explanation: The atoms of a paramagnetic material possess a permanent magnetic dipole moment of their own. On account of the ceaseless random motion of the atom, no net magnetisation is seen. But in the presence of an external field B₀, which is strong enough and at low temperature, the individual atomic dipole moment can be made to align and point in the same direction as B₀.

The field lines get concentrated inside the material and the field inside is enhanced.
When placed in a non uniform magnetic field, the bar tends to move from weaker part to the field to the stronger part.
Example: Aluminium, sodium, calcium, oxygen etc.
Curie’s Law:From experiments, it is found that the intensity of magnetisation M of a magnetic material is
(I) Directly proportional to the magnetising field intensity H,
(II) Inversely proportional to the Absolute Temperature T, 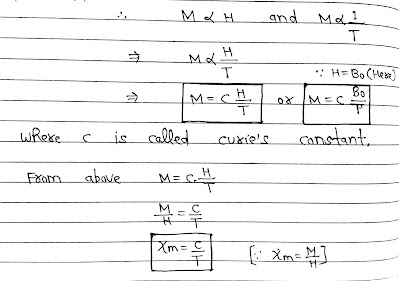 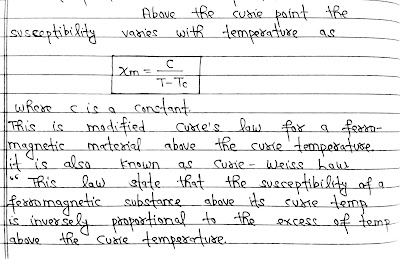 Potential Energy of a Magnetic Dipole (bar magnet) in a Magnetic Field: We know that the magnitude of a torque ...

The Earth’s Magnetism: In 1600, Sir William Gilbert was the first to suggest that the Earth itself is a huge ...