The energy released during a nuclear reaction is called nuclear energy.   Or

The two distinct way of obtaining energy from nucleus are as follows.

Nuclear Fission is the phenomenon of splitting of a heavy nucleus into two or more lighter nuclei by the bonding of proton, neutron, Alpha-particle etc.

Here the value of Q is referred to the energy released in the nuclear process, which can be determined using Einstein’s mass energy relation(E= ∆mc²). The Q-value of this reaction is about 200.4 MeV.

This Chain Reaction may be of two types.

During fission reaction, neutrons released are again absorbed by the fissile isotopes, the cycle repeats to give a reaction in this process a very huge amount of energy released within second.

The below change shows uncontrolled chain reaction. Atomic bomb is an example of this reaction. 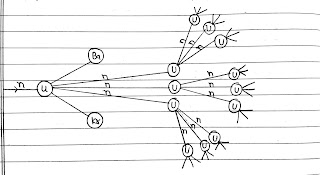 The chain reaction can be controlled and maintain steady by absorbing a suitable number of neutrons at each stage of the reaction, so that on the average one neutron remains available for exciting further fission. Such a reaction is called controlled chain reaction.

It was first done by USA In 1942. Nuclear reactor is an example of controlled chain reaction.

It is a device which convert nuclear energy into electrical energy.

Principal: It is based on the principle of controlled fission reaction. 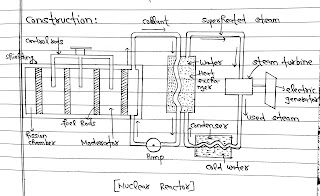 (I) Nuclear Fuel:  It is a material that can be used for the fission process. Generally U²³⁵ is used as nuclear fuel.

(II) Nuclear Reactor Core: It is the portion of a nuclear reactor containing the nuclear fuel components where the nuclear reaction takes place.
(III) Moderator: It is a medium to slow down the fast moving neutrons produced during the fission. Heavy water, graphite, paraffins etc are used for this.
(IV) Control Rods: The working of control rods is to capture the slow moving neutrons. Silver, indium, boron etc are used for this.
(V) Coolant: It is a liquid used to remove heat from nuclear reactor core and transfer it to electrical generator.
(VI) Shielding:  It is the protective covering made of concrete wall to protect from harmful radiations.
Working:


If we want to start nuclear reactor, first of all the control rods are taken out, due to which the reaction starts, hence heat is produced. This heat goes to heat exchange and when water boils up and converted into superheat steam. This steam goes to turbine, due to which turbine rotates and hence electricity is generated.

Half-Life of Decay and Average Life

Half-Life of Decay: It is defined as the time after which number of atom left will become half of initial ...