For Fusion to take place, the two nuclei must come close enough so that attractive short range nuclear force is unable to affect them. Since both the nuclei are positively charged particles, so they experience coulombs repulsion. Therefore, they must have enough energy to overcome this coulomb barrier.

Fusion of hydrogen nuclei into helium nuclei is the source of energy of most of the stars including the sun.

The fusion reaction in the sun is a multi-step process in which the hydrogen is fused into helium. The proton- proton(P,P) cycle by which this occurs is represented by the following reactions. 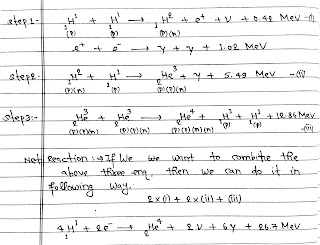 If the energy released in a thermoreaction is controlled in such a manner that a limited amount of energy is produced continuously. It can be used for many useful purposes, particularly for generation of electrical power.

Half-Life of Decay and Average Life

Half-Life of Decay: It is defined as the time after which number of atom left will become half of initial ...