It is the phenomenon of emission of electrons from the surface of metal, when radiations of suitable frequency fall on it. Or

The phenomenon of converting light energy into electrical energy is called Photoelectric effect.

Threshold Frequency: For a given material, there exists a certain minimum frequency of the incident radiation below which no emission of photoelectrons take place. This frequency is called threshold frequency.

The the Apparatus consists of an evacuated glass or Quartz tube which encloses a photosensitive plate C called emitter and a metal plate A called collector. 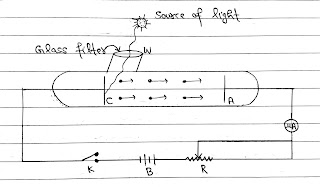 When monochromatic radiation of suitable frequency fall on plate C through glass filter, the electrons are emitted by the plate C and are collected by plate A. When the collector plate is positive with respect to the emitter plate C, the electrons are attracted to it and hence photoelectrons current is constituted. The potential difference between the emitter and collector plates is measured by a voltmeter(V), we whereas the resulting photocurrent flowing in the circuit is measured by a microammeter(μA).

Effect of Intensity of light on Photocurrent:

For fixed frequency of incident radiation and accelerating potential, the photoelectric current increases linearly with increase in intensity of incident light. 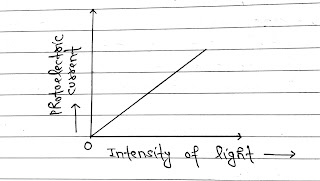 Effect of Potential on Photoelectric Current:

Effect of Frequency of Incident Radiation on Stopping Potential: 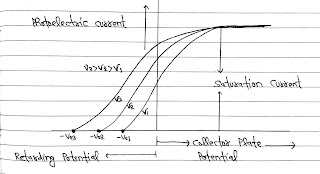 There exist a certain minimum cut-off frequency v₀ for which the stopping potential is zero. 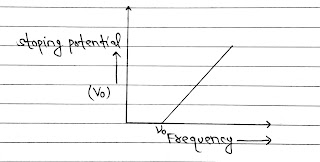 The de-Broglie suggested that every moving particle has a wave associated with it. Davission and Germer experimentally proved that fast ...

The laws of photoelectric emission are as follows (I) For a given material and a given frequency of incident radiation, ...