Potential Energy of a Dipole in an External Field

Potential Energy of a Dipole in an External Field:

Let an electric dipole placed in an uniform electric field E with its dipole moment P making an angle θ with electric field. Two equal and opposite charges exerts forces +qE and -qE acts on its two ends. The two forces form a couple.

The torque exerted by the couple will be 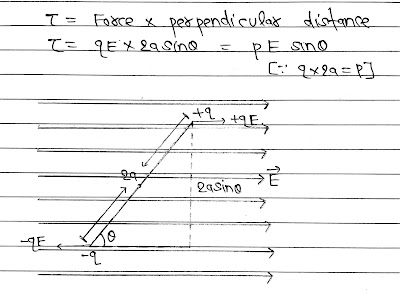 If the dipole is rotated through a small angle dθ against the torque acting on it. Then the the small work done is 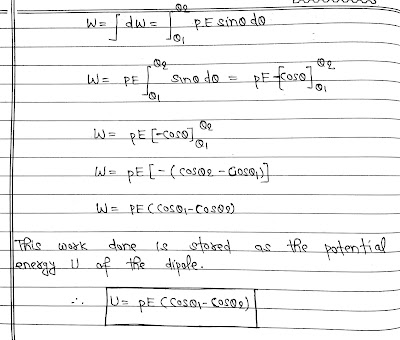 Chapter-2|Electrostatic Potential and Capacitance| NCERT 12th Physics: Equipotential Surfaces: Any surface which has same electrostatic potential at every point on ...

Electrostatic Potential Due to a System of Charges

Chapter-2|Electrostatic Potential and Capacitance| NCERT 12th Physics: Parallel Plate Capacitor: The simplest and the most widely used capacitor is the ...