Shape and Size of Nucleus:

Nuclei are regarded as spherical.

The size of the nucleus has been measured with the help of a variety of experiments involving the scattering of particles as neutrons, protons, electrons, etc.

From all these experiments, it is found that the volume of the nucleus is directly proportional to the number of nucleons (mass number) constituting nucleus. 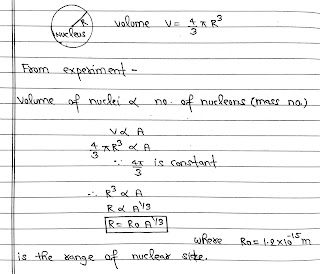 Fermi(fm) is used for the size of nucleus.

Density is defined as mass per unit volume.

If m is the average mass of nucleon and A is the mass number of element,

then mass of nucleus = m.A 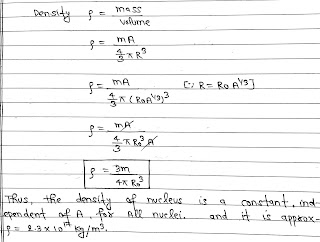