It is device used to accelerate charged particle like proton and alpha-particle etc. to very high energies. It was invented by E.O. Lawrence and M.S Livingston in 1934.

A charged particle can be accelerated to very high energy by making it pass through a moderate electric field a number of times. This can be done with the help of a perpendicular magnetic field which throws the charged particle into a circular motion, the frequency of which does not depends on the speed of the particle and the radius of the circular orbit.

It consists of two small hollow metallic half cylinder D₁ and D₂ called dees as they are in the shape of D. They are mounted inside a vacuum chamber between the poles of a power Electromagnet. The dees are connected to the source of high frequency alternating voltage of few hundred kilovolts.The charged particle are pulled out the dees by a deflecting plate(which is negatively charged) through a window.

Let a particle of charge q and mass m inter a region of magnetic field B with velocity v, normal to the field B. The particle follows a circular path, the necessary centripetal force being provided by the magnetic field. Therefore

From above it is clear that frequency is independent of both the velocity of the particle and the radius of the orbit. 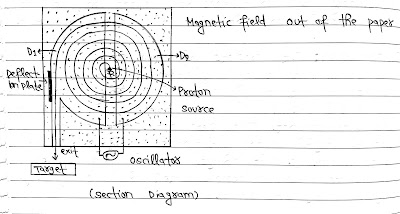 Working:
If a positive Ion(a proton) released from source P and find dee D₁ to be negative. It get accelerated towards dee D₁. As it enters the dee D₁, it does not experience any electric field due to holo dees, and now perpendicular magnetic field act on proton and throws it into a circular path. At the instant the proton comes out of dee D₁, Its find dee D₁ positive and D₂ negative. Now it get accelerated towards dee D₂.
It moves faster through D₂ describing a larger semicircle then before. Thus  if the frequency of the applied voltage is kept exactly the same as the frequency of the revolution of the proton, then every time the proton reaches the gap between the two dees. The electric field is reversed and proton receives a push and finally it acquire very high energy. This is called Cyclotron’s resonance condition. The proton follows a spiral path. The accelerated Proton is injected through a window by a deflecting voltage and hit a target.
If v is the maximum velocity acquired by the ions and r is the radius of the dees, at that case. Then

Chapter-4|Moving Charges and Magnetism| NCERT 12th Physics: Solenoid: A solenoid is a insulated long wire closely wound in the form ...

Conversion of Galvanometer Into an Ammeter

Chapter-4|Moving Charges and Magnetism| NCERT 12th Physics: Conversion of Galvanometer Into an Ammeter: Ammeter: A device used to measure electric ...

Chapter-4|Moving Charges and Magnetism| NCERT 12th Physics: Magnetic Force on a Current Carrying Conductor (In a Uniform Magnetic Field): We ...