Ampere’s circuital law state that the line integral of magnetic field B, around any closed path is equal to μ₀ times the total current threading the closed path i.e

According to Maxwell the above equation is logically inconsistent. With the help of following observation he prove it.

Maxwell’s Experiment to Prove His Point: 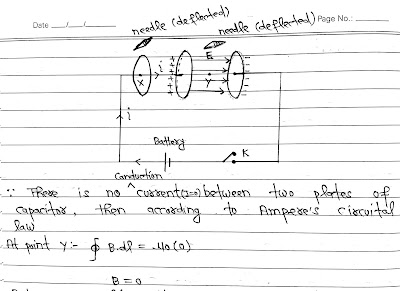 But in reality it was not correct, because when Maxwell put magnetic needle between two plates it get deflected. He shocked that why this magnetic needle get deflected, while there is no any conduction current between these two plates.
So, he told there is something missing in Ampere’s Circuital Law.
After a variety of experiment Maxwell conclude that at the time of charging of capacitor, there is change in electric field or electric flux, due to this a current is flowing between two plates of capacitor. He named this current as displacement current.
Maxwell said that not only current produces magnetic field but a changing electric field in vacuum/free space also produces magnetic field.
Definition of Displacement Current:

Properties of Displacement Current:
1. It is not conventional current, as it produces magnetic field, so it is called current.
2. It exists only, when there is a change in electric field(electric flux).
3. It does not exist under steady conditions.
4. Together with the conduction current, displacement current satisfies the property of continuity.
20.59368478.96288

Chapter-8|Electromagnetic Waves|NCERT 12th Physics: Maxwell’s Equations: Maxwell’s equations are the basic laws of electric city and Magnetism. All the basic ...