At a certain distance r₀ from the nucleus, whole of the kinetic energy of α particle convert into electrostatic potential energy and α particle cannot go further close to nucleus, this distance(r₀) is called distance of closest approach. 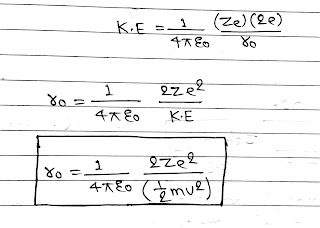 Vq= Potential Energy and We know that

Here z= atomic number which is equal to number of proton in nucleus and e= charge of proton, So total charge= Ze

In α particle there are total 2, +Ve charge. So if charge on 1, α particle be e, then

Perpendicular distance of the velocity vector of α particle from the central line of the nucleus of the atom is called Impact Parameter. 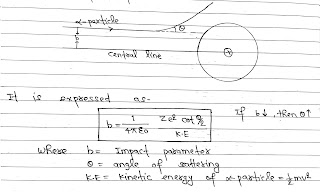 The Rutherford nuclear model of the atom pictures the atom as an electrically neutral sphere consisting of a very small, massive and positively charged nucleus at the centre surrounded by the revolving electron in their respective dynamically stable orbits.

The electrostatic force(Fb) between the revolving electrons and the nucleus provides the requisite centripetal force(Fc) to keep them in their orbits. (like Moon and Earth gravitational and centripital). 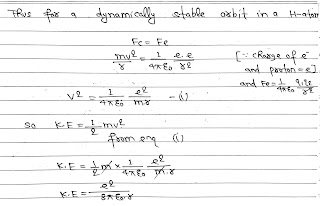 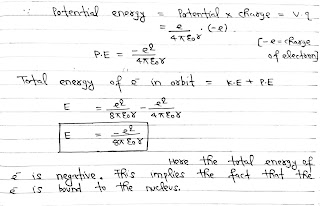 In this experiment H Geiger and E Marsden( Student of Rutherford and on suggestion of Rutherford) took ₈₃Bi²¹⁴ (Bismuth) as ...

Bohr combined classical and early quantum concepts and give his theory in the form of three postulates. (I) Bohr’s first ...

All elements consists of a very small invisible particles are called atoms. Atoms of some elements are same and atoms ...