A pair of equal and opposite charges separated by a small distance is called an electric dipole.

The midpoint of -q and +q is called the centre of the dipole.

Dipole Moment of an Electric Dipole:

The strength of an electric dipole is measured by a vector quantity known as electric dipole moment(p), which is the product of the either charge(q) and separation between the charges(2l). 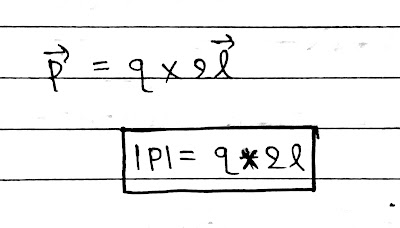 Its direction is always from negative to positive. The SI unit is C-m.
Example:- Dipoles are common in nature. In molecules like H2O, HCL etc. The centre of positive charges does not fall exactly over the centre of the negative charges. Sach molecules are electric dipoles.
20.59368478.96288

Chapter-1|Electric Charges and Fields | NCERT 12th Physics: Electric Flux: Electric flux linked with any surface is defined as the ...

Chapter-1|Electric Charges and Fields | NCERT 12th Physics: Charging by Induction:- The process of charging a neutral body by bringing ...