Electromagnetic waves are the waves which are produced due to change in electric field E and magnetic field B Sinusoidally and propagating through space such that the two fields are perpendicular to each other and perpendicular to the direction of wave propagation.

The energy associated with the propagating wave comes at the expense of the energy of the source of the accelerated charge.

Since, the oscillation of electric field and magnetic field occur perpendicular to the direction of wave propagation, so electromagnetic wave is a transverse wave. 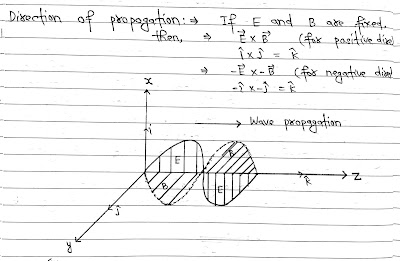 Speed of Electromagnetic Wave:
Maxwell’s also observed that the ratio of peak value of E(E₀) and B(B₀) is equal to speed of light.

Chapter-8|Electromagnetic Waves|NCERT 12th Physics: Displacement Current: Ampere’s circuital law state that the line integral of magnetic field B, around any ...

Chapter-8|Electromagnetic Waves|NCERT 12th Physics: Maxwell’s Equations: Maxwell’s equations are the basic laws of electric city and Magnetism. All the basic ...