Forces Between Multiple of Charges:(Superposition Principle):-

It state that when a number of charges are interacting, the total force on a given charge is the vector sum of the forces exerted on it due to all other charges. The force between two charges is not affected by the presence of other charges. 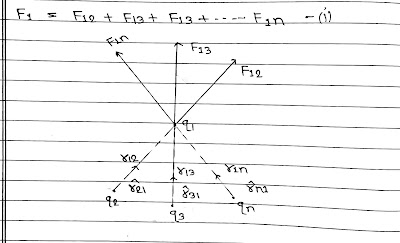 Chapter-1|Electric Charges and Fields | NCERT 12th Physics: Applications of Gauss’ Theorem: (I) Field Due to an Infinitely long Charged ...

Chapter-1|Electric Charges and Fields | NCERT 12th Physics: Dipole in a Uniform External Field: Torque on an Electric Dipole in ...

Chapter-1|Electric Charges and Fields | NCERT 12th Physics: Electric Field: The electric field due to a charge q at a ...