Hydrogen Spectrum or The Line Spectra of the Hydrogen Atom

# When we pass white light through a Prism it is disperse into seven colours.

# But when we heat atomic gas(hydrogen) with the help of electric current and passed through a Prism then see what happened.

After dispersion only some particular wavelength are seen on the screen. This is called line spectrum or discrete spectrum.

There is a one more type of hydrogen spectrum that exists where we get dark lines on the bright background. It is known as absorption spectrum.

Note: For different gases, the specific wavelength present on screen are different.

1. In Bohr’s model we studied that electron can revolve only in certain orbits or certain energy levels.

3. The electron remains in ground state(n=1) but on heating the gas, the electron gains energy and jump to higher energy level(excited state).

4. The electron is unstable in excited state and thus it de-excited or fall back to the lower energy level and emitting radiation in the form of photon of a particular wavelength.

5. The energy of photon emitted is equal to difference in energy of two orbits involved in transition.

6. As energy level are discrete(certain value) So, the wavelength λ of emitted Photon can have some specific value only. This gives the birth of line or discrete emission spectrum.

7. For different gases, Z is different, Thus energy level have different values and hence λ has different sets of values.

Calculation of Wavelength for Particular Photon: 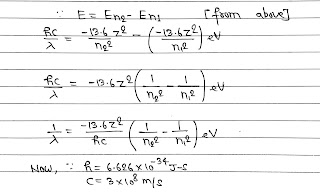 The above formula can be used for calculating λ of a photon in a transition.

Study About Spectrum and Series:

If electron falls from any orbit to first orbit then λ so emitted are called Lyman Series. 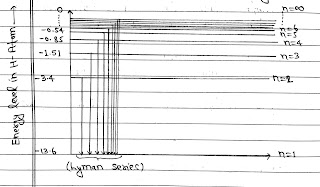 Other series of spectra for hydrogen were subsequently discovered and known by the name of their discoveries.

Lyman Series in the ultraviolet region and Paschen, Brackett and Pfund in the infrared region. 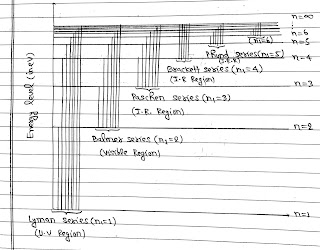 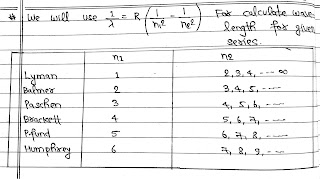 Bohr combined classical and early quantum concepts and give his theory in the form of three postulates. (I) Bohr’s first ...

Rutherford’s model suffers to major drawbacks. 1. Stability of Atom: According to Maxwell, an accelerated charged particles emits radiation(energy). In ...

According to Bohr’s theory, A hydrogen atom consists of a nucleus with a positive charge Ze and a single electron ...