A French physicist H Bequerel discovered radioactivity in 1896 by accident. Radioactivity is spontaneous nuclear phenomenon in which an unstable nucleus undergoes a decay with the emission of same(α,β) and electromagnetic radiations (γ) rays.

In nature, three types of radioactive decay occurs which are as-

In α decay, a helium nucleus ₂He⁴ is emitted.

In β decay, electrons or protons with the same mass as electron are emitted.

According to this law, the rate of decay of radioactive atoms at any instant is proportional to the number of atoms present at that instant.

let N be the number of atoms present in a radioactive substance at any instant t, then

Note: For a given element the value of Lambda is constant but for different element it is different. 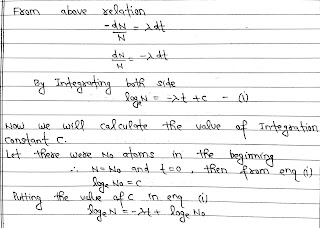 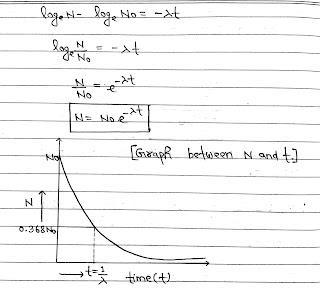 From graph it is clear that a radioactive substance will take infinite time in decaying completely. 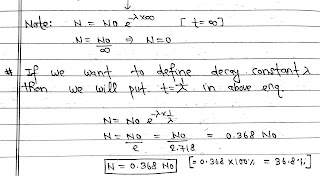 The radioactive decay constant may be defined as the reciprocal of the time during which the number of atoms in a radioactive substance reduces to 36.8% of their initial number.

Shape and Size of Nucleus: Nuclei are regarded as spherical. The size of the nucleus has been measured with the ...