This Law describes which chemical element and isotope are created during the particular type of radioactive decay.

α-Decay is a process in which and unstable nucleus transforms itself into a new nucleus by  emitting and α particle (A Helium nucleus ₂He⁴). 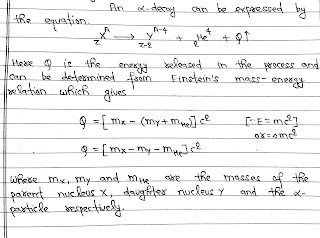 Decay is possible only, when the total mass of decay products is less than the mass of the initial nucleus. This difference in mass appears as kinetic energy of the products.

The process of spontaneous emission of an electron(e⁻) or a positron(e⁺) from a nucleus is called β-Decay.

The mass number of the radioactive nucleus remains unchanged but its atomic number increases by 1. An electron and a new particle antineutrino are emitted from the nucleus.

The mass number of the radioactive nucleus remains unchanged but its atomic number decreases by 1. A positron and a new particle neutrino are emitted from the nucleus. 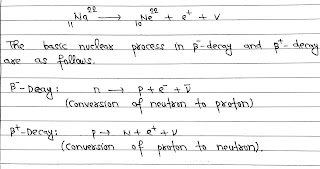 The process of emission of a γ- rays photon during the radioactive disintegration of a nucleus is called γ-Decay.
As the emitted γ- ray photons have zero rest mass and carry no charge, So in γ-Decay the mass number and atomic number of the nucleus remains unchanged and no new element is formed.
A γ-Decay can be expressed as-

A nucleus does not contain photons yet it can emit photons. These photos are created during the emission process. We know that nucleus can exist in different energy states.
After an alpha or beta decay the daughter nucleus is usually left in the excited state. It attends the ground state by emitting one or more photons. As the nuclear state have energy of the order of MeV, therefore the photons emitted by the nuclei have energy of the order of several MeV. The short wavelength electromagnetic wave emitted by the nuclei are called gamma rays.
Example: An unstable ₂₇Co⁶⁰ nucleus is transform via a β-Decay into an excited ₂₈Ni⁶⁰ nucleus, which is turn reaches the stable ground state by emitting Photon of energy 1.17 MeV and 1.33 MeV, into two successive γ-Decay process. 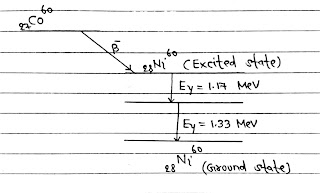