Resolving power of an optical instrument is the ability of the instrument to produce separate image of two close objects.

# The minimum distance between two objects, which can just be seen as separate by the optical instrument is called the limit of the resolution of the instrument.

Resolving Power of a Microscope:

The resolving power of a microscope is defined as the reciprocal of the distance between two objects which can be just resolved when seen through the microscope.

Resolving power of microscope depends on-

(I) Refractive index of the medium between the object and the objective lens of microscope.

(III) Half angle θ or β of the cone of light from one of the objects.

Resolving Power of a Telescope:

The resolving power of a telescope is define as the reciprocal of the smallest angular separation between two distant objects, whose images are to be seen separately. 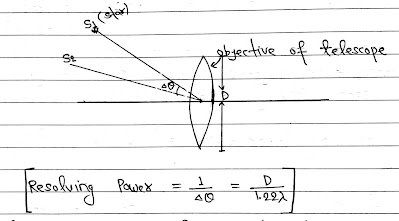 Resolving power of telescope depends on-

(I) Wavelength λ of light.

Chapter-10|Wave Optics|NCERT 12th Physics: Doppler’s Effect in Light: The change in frequency or wavelength of the light wave due to ...

Chapter-10|Wave Optics|NCERT 12th Physics: Proof for laws of Reflection at a Plane Surface (By Huygens’ Wave theory): When parallel rays ...

Diffraction of Light at a Single Slit

Chapter-10|Wave Optics|NCERT 12th Physics: Diffraction of Light at a Single Slit: A parallel beam of light with a plane wavefront ...