A transverse wave or Light in which vibrations are present in all possible directions, in a plane perpendicular to the direction of propagation, is said to be unpolarised.

If the vibrations of a wave are present in just one direction in a plane perpendicular to the direction of propagation, the wave is said to be polarised or plane polarised.

This phenomenon of restricting the oscillations of a wave to Just One Direction is the transverse plane is called polarisation of wave or light.

The plane containing the direction of propagation of light and perpendicular to the plane of vibrations is called the plane of the polarisation.

When unpolarised light passing through First slit S₁ will permit only those vibrations to pass through it which are parallel to the slit S₁ and will cut of all other vibrations. Thus the wave emerging from the slit S₁ is plane polarised. The slit S₁ is called polariser. If the second slit S₂ called the analyser, is held parallel to S₁, the wave from S1 will pass through S₂ unchanged. If S₂ is held perpendicular to S₁, no vibrations will emerge from the slit S₂. This indicates that the slit S₁ has polarised the incoming wave in the vertical plane.

When a plane polarised light is seen through an analyser, the intensity of transmitted light varies as the analyser is rotated in its own plane about the incident direction.

In 1809 I.N Malus discovered that when a beam of completely plane polarised light is passed through analyser, the intensity I of transmitted light varies directly as the square of the cosine of the angle θ between the transmission directions of polariser and analyser. This statement is known as the law of malus. 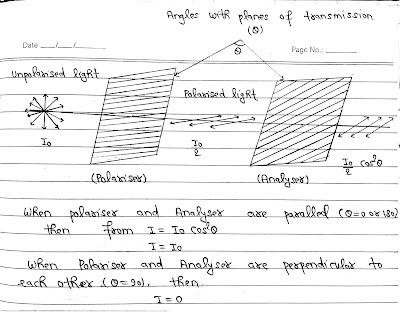 Chapter-10|Wave Optics|NCERT 12th Physics: Proof for laws of Reflection at a Plane Surface (By Huygens’ Wave theory): When parallel rays ...

Polarisation of Light by Scattering and Reflection

Chapter-10|Wave Optics|NCERT 12th Physics: Polarisation of Light by Scattering: From below figure the dots shows vibrations perpendicular to the plane ...

Chapter-10|Wave Optics|NCERT 12th Physics: According to huygens light is a mechanical wave (require a medium). Huygens supposed the existence of ...