1. We take an unmagnetised ferromagnetic material and keep it in a solenoid and increase the current through a solenoid that means magnetic intensity H.

As H increases, magnetisation I also increases until saturation is achieved.

That means all atomic dipoles are aligned with applied H (point a). On further increasing current there is no change in I as saturation is achieved. 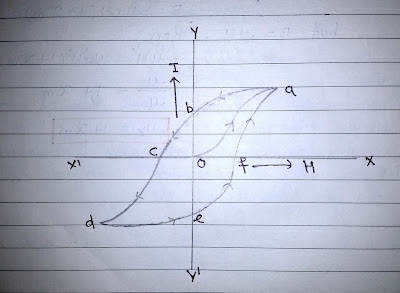 2. Now if we decrease current that is H decreases, I also decreases, But it is observed that even when current is reduced to zero but there is still some magnetisation left.

Retentivity:- Tendency to retain property of magnetisation even when external field is removed.

3. Now to make I=0 that is to bring dipole to original configuration, Opposite current is applied (H= -Ve). On increasing H in negative direction (at point c) I become 0.

Coercivity:- The amount of -Ve H required to make I=0.

7. On further increasing current, at same point a, I get saturated.

Force Between Two Magnetic Poles: The force of attraction or repulsion F between two magnetic poles of strengths m1 and ...

The Electrostatic Analog: The magnetic dipole moment of a bar magnet- M= m(2l), where,  m = strength of the pole ...

Potential Energy of a Magnetic Dipole (bar magnet) in a Magnetic Field: We know that the magnitude of a torque ...

Magnetic Field Strength at a Point Due to a Bar Magnet

Chapter-5|Magnetism and Matter| NCERT 12th Physics: Magnetic Field Strength at a Point Due to a Bar Magnet: The Strength of ...