First Law:- The incident ray, the refracted ray and the normal to the refracting surface at the point of incidence, all lie in the same plane.

Second Law(Snell’s Law):- The ratio of the sine angle of incidence to the Sine angle of refraction is constant for the two given media. This constant is denoted by ¹μ₂ and is called relative refractive index of medium 2 with respect to medium 1.

The angle of incident in denser medium for which angle of refraction in rarer medium is 90⁰ called Critical Angle.
The value of critical angle depends on the nature of two media in contact. 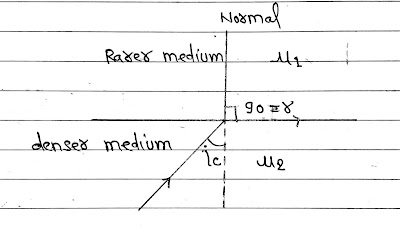 According to Snell’s Law

Power of a Lens

Chapter-9|Ray Optics and Optical Instrument|NCERT 12th Physics: Power of a Lens: The ability of a lens to converge or diverge ...

Chapter-9|Ray Optics and Optical Instrument|NCERT 12th Physics: Prism: A Prism is a portion of a transparent medium bounded by two ...

Refraction at a Spherical Surface

Chapter-9|Ray Optics and Optical Instrument|NCERT 12th Physics: Refraction at a Spherical Surface: We will consider two transparent medium of refractive ...