When a Ray of light strikes the interface at the angle greater than Critical Angle, it comes back in the same medium, this phenomenon is called total internal reflection(TIR). 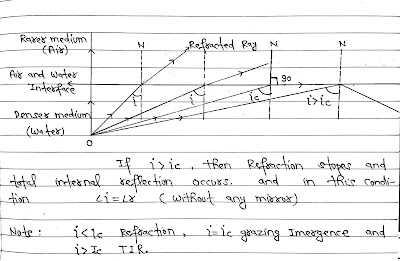 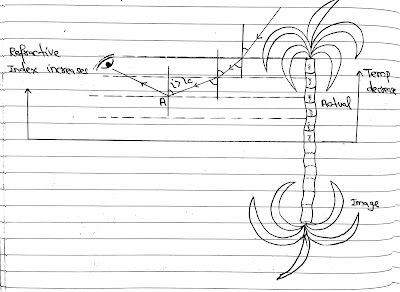 Whenever a Ray coming from the undergo refraction and at one point A, the ray makes an angle greater than Critical Angle, then it undergoes in total internal reflection and when it goes into the eyes of person an inverted image of tree is seen by the person which appears as there is water, but actually there is no water. This phenomenon is called mirage.
Diamond:
Brilliance of diamond depends upon total internal reflection and its refractive index is 2.42 so the critical angle is 24.41⁰. The phases of diamond are cut in such a way so that the angle of incident is greater than critical angle and light come back in the same medium and suffers multiple TIR, in this way diamond sparks.
Prism:
For glass and air interface the critical angle is 42⁰ and the faces of prism are cut in such a way that when light strike the surface of prism, it’s make an angle of 45⁰, which is greater than Critical Angle and therefore light suffers TIR and comes out from the prism and different images are formed.

Optical Fibres:
It is a device like thin tube of transparent medium which is used to transmit the light from one end to another end. It is based on the principle of total internal reflection. 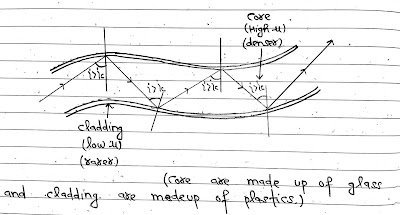 It consists of two layers one is called inner layer(core) and other is outer layer called cladding. The core has high refractive index while cladding has low refractive index. When light coming from one end is incident on core at angle greater than Critical Angle, it suffers multiple TIR and comes out from other ends.

Dispersion By a Prism

Chapter-9|Ray Optics and Optical Instrument|NCERT 12th Physics: Dispersion By a Prism: The phenomenon of splitting of light into its component ...

Refraction at a Spherical Surface

Chapter-9|Ray Optics and Optical Instrument|NCERT 12th Physics: Refraction at a Spherical Surface: We will consider two transparent medium of refractive ...